OMG, I start to understand what some Youtubers mean when they say that YouTube is hard work but they like it. That’s what I think about the blog right now too, but a promise is a promise. So here we go: CERN

To give you some context: It’s (once more) late in the night and I would really like to go to bed right now, but I won’t have any opportunity to write the article tomorrow so I have no choice. The reason why the article seems to you to be appeared at 15 o’clock is, well, I can set the time when WordPress publishes the article. I could write articles years in advance and let WordPress publish them automatically at any time in the future.

But back to CERN. Most of you will think about the huge particle accelerator when they hear the name CERN though this isn’t correct. The CERN exists (according to Wikipedia) since 1954 while the particle accelerator, whose name is actually LHC, was inaugurated in 2008 by the CERN.

The name CERN stands, in its original version, for “Conseil européen pour la recherche nucléaire” which is French and translates to “European Council for Nuclear Research”. However, the CERN was actually renamed later. They kept the acronym CERN, but changed their name to “Organisation européenne pour la recherche nucléaire” (I suppose OERN wasn’t poetical enough 😉 ). Anyhow, in 2008, they finished the “Large Hadron Collider”, abbreviated with LHC and this is what people mostly think of when they talk about the CERN.

Fortunately, one of my class mates knows an engineer who studied at the INSA (my university here in Strasbourg) and now works at CERN who gave us the opportunity to visit the CERN. And by pure (somewhat planned) coincidence, the LHC was currently in in its maintenance cycle which allowed us to get down under the earth and actually see the LHC in real. If you’re not a scientist, I don’t care if you’re not too interested in the LHC, but for any scientist in the world, the LHC is the Holy Grail. It’s the biggest machine ever built by humans with a circumference of 26 km (source)!

To actually see the LHC, you need to go down 100m by stairs. Noo, just joking, there is obviously an elevator there to but stairs are always a good alternative if you want to do some sports, especially if they are 100m high. In normal buildings, you always have stairs right next to the elevator and your mom told you for sure to never use the elevator in the event of fire. Well, not here. Just imagine you running up those 100m of stairs when there’s a big giant bowl of fire behind you. I guess you could run some 30m, but then you would get tired and eventually die. This elevator has special cables that resist extreme temperatures and the shaft is protected, too, so it’s actually safer to use the elevator than to run the stairs in the event of fire.

But fortunately, there was no fire when we came down and we got to see the CMS (Compact Muon Solenoid, one of the many detectors in the LHC). And ginormous is not a word for it. Just have a look at the human in the lifting platform: 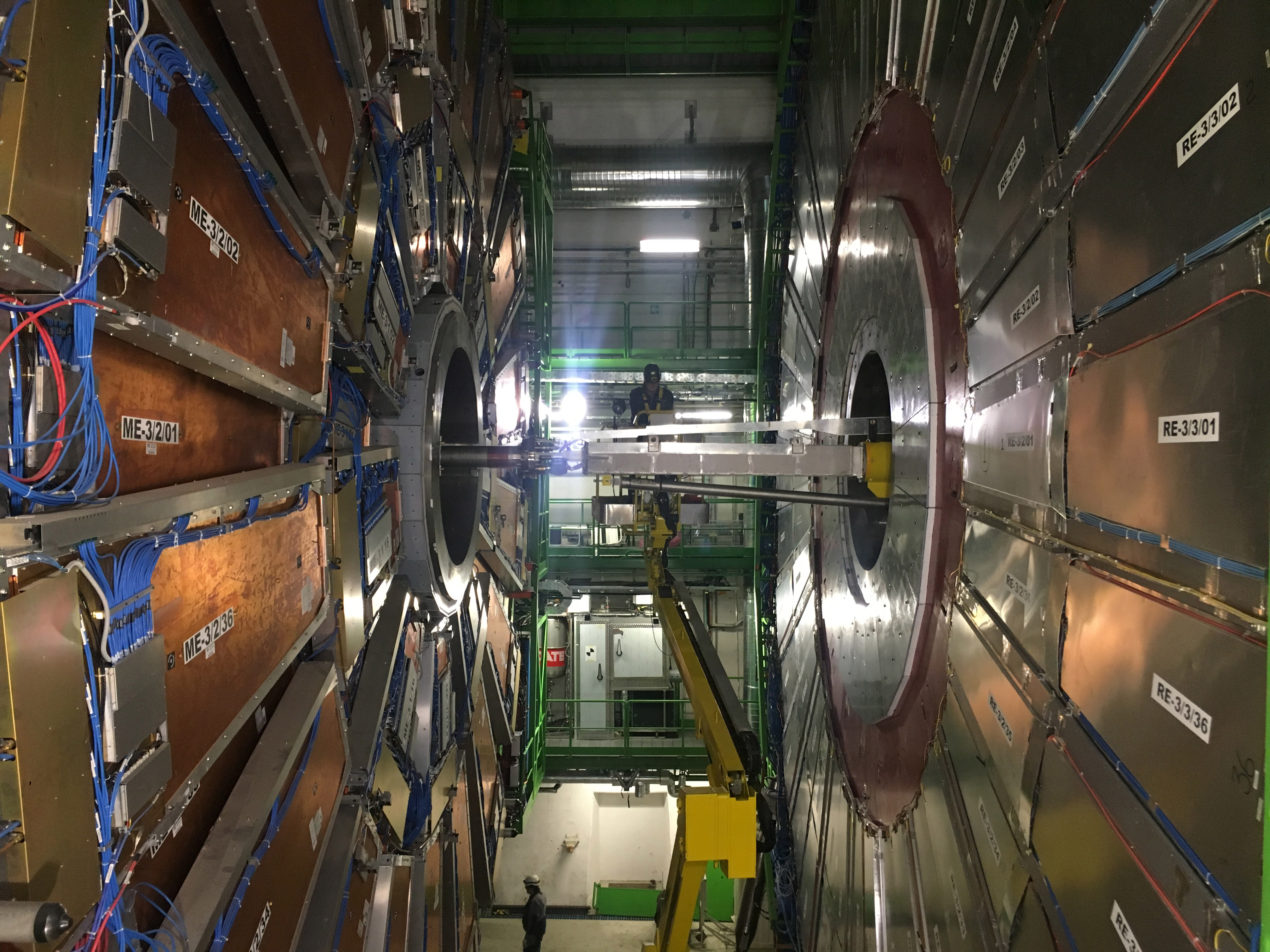 Obviously, the LHC was the most interesting thing of that day, but not the only one we saw. We are studying geodesy so we went to see some geodesists working at CERN, too. You will never see a geodesist win a Nobel prize at CERN, but no physician would have ever won any Nobel prize at CERN without geodesists. The physicians do the actual research but the geodesists give them the tools to do their research and, probably most importantly, align machines, like the LHC, to a micrometre precise. Just imagine those little atoms that they shoot that are at least 100 pm (= 0,0000000001 m) in size would miss each other just because they misplaced a tube by 1 mm (=0,001 m). This leads to very interesting methods of measurement that are only used at CERN and nowhere else.

But enough talking (I’m too tired), let’s look at the photos:

Ok, all the photos are uploaded and everything seems to look ok. Folks, I really need to go to bed now, as I planned to go to work tomorrow, so have a nice evening and see you tomorrow when I tell you what happened in Milan.

Oh and, as always, the OneDrive link to the photos in case you want to see them in full screen.